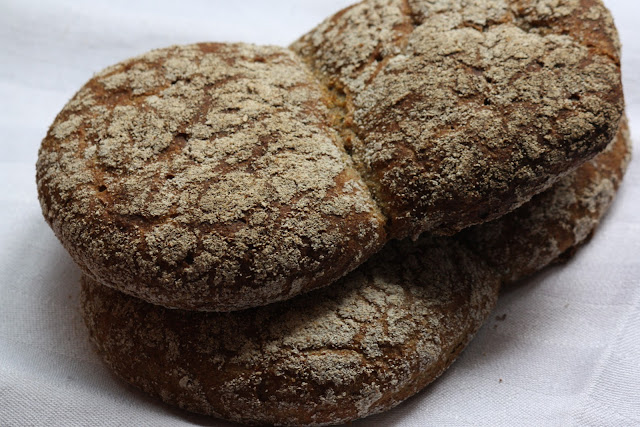 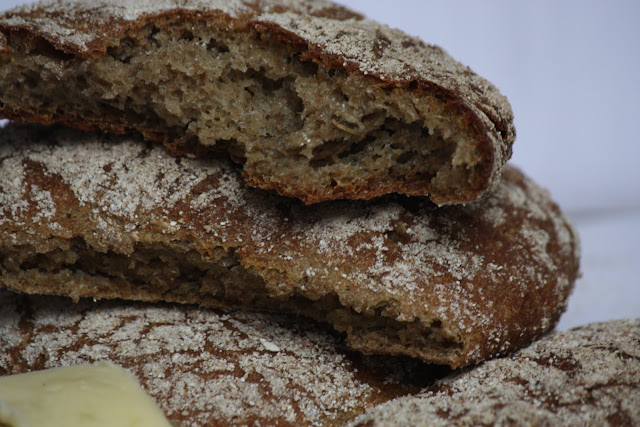 Vinschgauer or Vinschger Paarln are palm-sized, round flat breads that mostly come in pairs that can be torn apart. It's a specialty from South Tyrol, a bread mostly made with rye flour and spices, such as fennel seeds, caraway, and bird clover (birdsfoot fenugreek). I should add that bird clover is a bread spice typical of that region, and very hard to come by. If you can't get any, just leave it out; the fennel seeds and the fenugreek should add enough distinctive flavour to this bread.

Baking Vinschger Paarln was something I was planning for quite a while, since I really love their very particular taste. Finding a source for birdsfoot fenugreek was a little bit of a challenge, but in the end I was able to locate some in one of the many organic grocery shops, here in Wiesbaden, Germany. I am curious to see where I will find my source in Vancouver, once I'm back.

Anyway, today was the day, and I was eager to try out my adapted version from a formula I had found on the official info South Tyrolean website. Rather than using only commercial yeast, as the recipe suggested, I wanted to bake sourdough-based Vinschgauer. They turned out pretty nice, with a soft and moist crumb, lots of flavour, from all the spices, and due to the high amount of rye flour, they stayed fresh for a few days. That is also why the Vinschgerl are traditionally considered good companions on longer hikes. A perfect pairing for this kind of bread would be some aromatic mountain cheeses from the Alps, or plain butter.

For four pairs of Vinschgauer

Grind the fennel seeds, caraway, and the birdsfoot fenugreek using a mortar and pestle, then mix all your ingredients, except for the salt, in a large mixing bowl. Let rest for about 30 minutes for the autolyse. Now add the salt and start kneading. You won't see much dough development, since there isn't a lot of gluten present in the rye flour. The dough will feel like a pasty mass. Let it rest for about 45 minutes at room temperature, then divide into eight equal pieces of dough (at about 130 grams each). Shape the pieces into rounds. Since the dough is super wet and sticky, flour your hands with plenty of rye flour and dust your work surface generously. Transfer the rounds as pairs on a baking tray with parchment paper, let them proof at room temperature for another 60 minutes or until you can see their floured skin showing a web of fine cracks. That is a sign that they are ready for baking. Bake them in a preheated oven at 450 Fahrenheit for about 30 minutes.

Submitted to Yeastspotting.
by Lisa

Email ThisBlogThis!Share to TwitterShare to FacebookShare to Pinterest
Labels: Formulas and Recipes, Sourdough