So Who Is This Autolyse Anyway 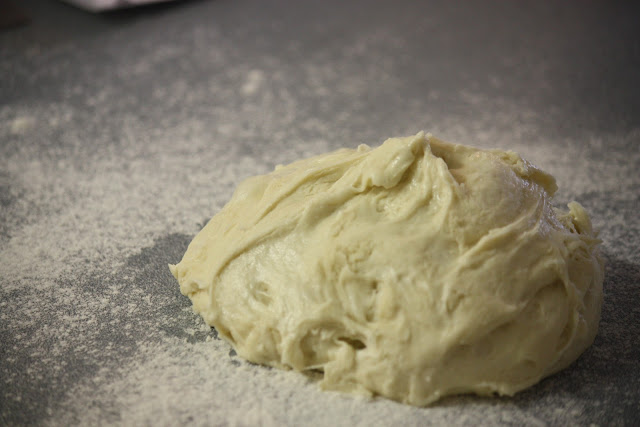 It has been pointed out to me that throughout our blog we use the term "autolyse" quite a bit without ever explaining its meaning. We also use the autolyse technique in pretty much all our baking. Let me try then to explain my own understanding of what autolyse is and what kind of benefits we get from using this technique.

The term itself is of Greek origin and literally means "self digestion". In biology, it refers to the destruction of a cell through the action of its own enzymes. In bread baking, it has to do with the transformation of flour due to the action of enzymes present in the flour itself.

For the purpose of bread baking, the term "autolyse" was coined by the late professor Raymond Calvel. Calvel is credited with developing or improving many of the bread baking techniques used nowadays by artisan bakers all over the world. He also had a large contribution in reviving French-style bread baking ... in France. Yes indeed, it's hard to believe, but good quality bread baking was all but extinct in France, following almost a century of decline in quality.

In the process of dough mixing, the autolyse technique consists in an initial mixing of flour and water (without the other ingredients), followed by a rest period. After the rest period, the yeast, salt, and all other ingredients are added and the dough is mixed to the desired level of gluten development. In a variation of the above process, only the salt is held back and added after the resting period. Either way, the main benefit of the autolyse is a better hydration of flour (by not having to "compete" for water with the salt and other dry ingredients), as well as a head-start for enzyme activity and faster gluten development. Doughs produced with the autolyse method result in loaves that are easier to shape, have more volume, and improved structure.

Try this technique on your favourite bread formula and you should see dramatic improvement. Also, if you get a chance, check out Raymond Calvel's ground-braking book The Taste of Bread. It's very hard to come by these days, but it's quite an eye-opener.

Email ThisBlogThis!Share to TwitterShare to FacebookShare to Pinterest
Labels: Techniques